The Goodcraft Show (and a little hood history) 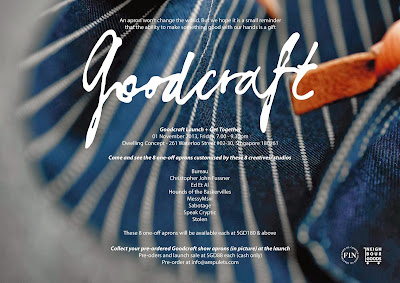 Come on down to the Goodcraft Show! There'll be 8 one-off, customised aprons by these 8 Goodcrafters and our limited edition Show aprons.

We open this Friday evening 1 November at 7pm, and will stay open over the weekend 2-3 November 1-6pm. (Click here for the Facebook event page)

The Show is at the Dwelling Concept gallery space located at Blk 261 Waterloo Street, #02-30.

Waterloo Street (and its surrounding Queen Street, Albert Street, Victoria Street) is in one of the most culturally historic districts in the city. A hood for art and history buffs...

Blk 261 Waterloo Street is one of a handful of HDB blocks developed right in the City Centre, replacing shophouses during the period of rapid urban development in Singapore's early independence until 1980. As such, these HDB blocks in Waterloo Street, but also Bras Basah, Chin Swee, Chinatown, Rochor, Tekka and Hong Lim are unique for not only featuring high-rise residential units, but several floors of commercial shop spaces.

As you wander around this hood, check out the 2013 Singapore Biennale showing at the Singapore Art Museum (former St Joseph Institution campus) and the museum annex 8Q SAM (former Catholic High School campus). Along these historic streets, you will also see some of Singapore's earliest places of worship built in the 19th century through to the 1920s: Catholic and Methodist churches, a Jewish Synagogue, the Kwan Im Thong Hood Cho Temple and the Sri Krishna temple.

So when you visit the Goodcraft Show, you are visiting a hood rich with modern Singapore history.
Happenings In the Hood