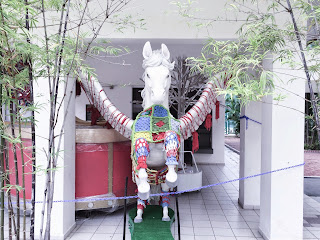 Is the community centre necessarily at the centre of a community?

It is hard to answer in the affirmative for most of the community centres in our neighbourhoods.

Their architecture is often one of exclusion: surrounded by a wall, gated. On your visit you would be confronted by an empty hall/fast food joint/carpark/basketball court - a singular entity whose identity is announced on the building facade with a government logo and sharp red text.

One afternoon wandering around a neighbourhood, we strayed into a community centre we felt hopeful about.

It comprised a cluster of small 2-storey buildings. As such, there is no discernible lobby or "main" entrance. The buildings are around a courtyard. At one corner of the courtyard are benches in front of a outdoor TV screen. There is no wall defining the compound, and no gate keeping anyone out.  One building houses a canteen on the ground floor. Another houses a teaching kitchen that we saw being used as a soup kitchen.

And then there was this strange, cheesy prop - a red chariot led by two winged white horses. Someone or more likely a kind of "community" had agreed to crochet a colourful patchwork to hide the horses' nakedness. Perhaps they had hours of conversation and song in the process.

Of course the centre of a community is never a building.
In the Hood