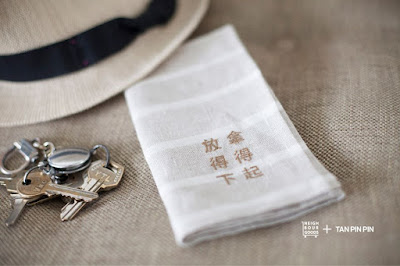 Pin Pin says: "拿得起, 放得下 (As easily as one attaches, one can detach) is a phrase I find wise to remind myself often. A friend once told me this while trying to console himself after a breakup. I find this epithet applies to most things, not just to breakups or spring-cleaning, but to art making too. I am currently in the throes of editing a documentary I had spent two years collecting footage for. Some of the footage I shot is spectacular, I love it, but it is also spectacularly out of focus so the footage cannot be used. It has to be tossed. It is too painful. But detach and move on I must. If there is a bright side, ditching footage gets easier with time, like a muscle that gets better with use. Meanwhile, the film is formed by whatever is left behind. Art-making is a process of coming to terms with the remnants of one's initial vision.

For Tan Pin Pin, filmmaking provides a reason to walk about, to probe and to ask questions. She likes the process of juxtaposing two disparate images collected during her walkabouts together, to create new meaning and finding connections between things, people, places, where none existed before. Her films include To Singapore, with Love, Invisible City, 7 Letters and Singapore GaGa.

To pre-order, simply write to us at info@ampulets.com before 4 December. We'll advise on the invoice/payment via paypal and on the collection/delivery.
We'll be giving part of the proceeds to a charity.

Good Sweat #8-12 is a series of 6 handkerchiefs, 6 designs, 6 inspirations, by 6 individuals with Neighbourgoods. Look out for the remaining 5 designs, coming soon in November/December 2015.

Good Sweat is an old-fashioned reminder that what matters is not the scale of the work or its reward, but to take care and to take pride in whatever we do. Good Sweat also celebrates the spirit of those who persist, however humble or challenging their job may be, in perfecting their craft.
Goods